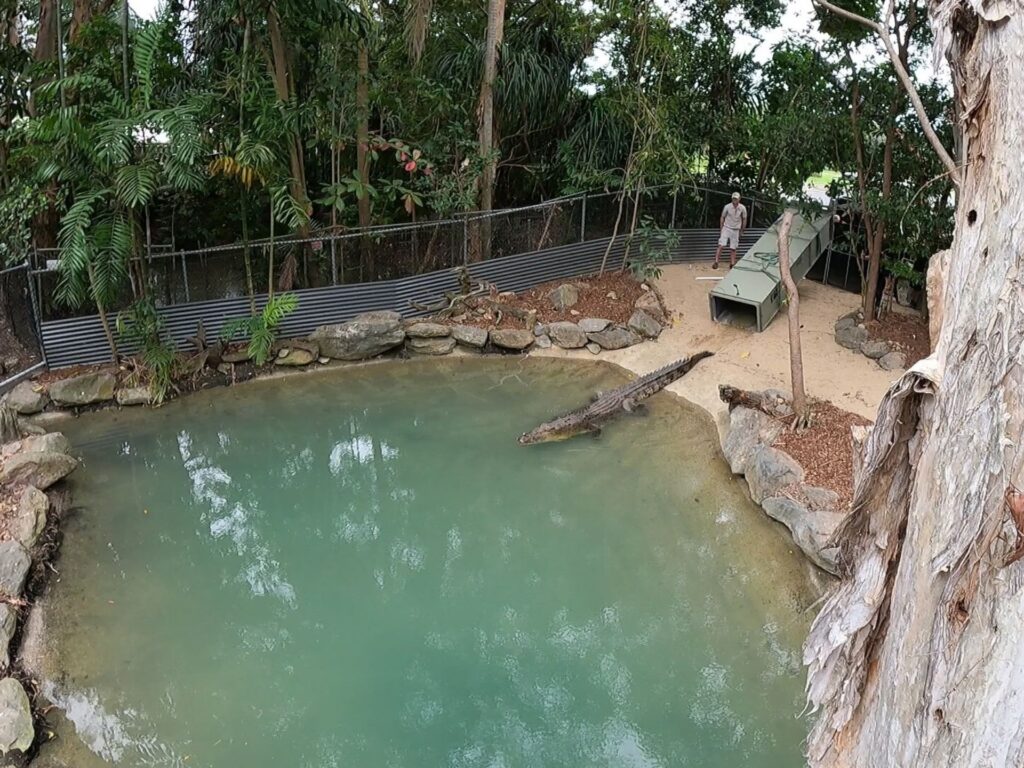 Two massive crocodiles have been successfully delivered to Wildlife Habitat Port Douglas from Australia Zoo, in preparation for the official opening of CrocArena next month.

Now in its final stages of construction, CrocArena will host an opening event on Friday 20th August.

Wildlife Habitat Wildlife Manager Rabecca Lynch said the move from Australia Zoo has been in the planning for over 6 months, and was executed perfectly to plan.

“It has been a massive process moving huge Crocodiles 1,700km across Queensland,” she said.

“The Wildlife Habitat and Australia Zoo croc teams worked together to ensure a smooth and safe transition for the capture, transportation and release.”

‘Digger’ and ‘Big Al’ had been an integral part of the world famous Crocoseum show at Australia Zoo for decades, and will now be a feature in their new home at Wildlife Habitat’s CrocArena.

A third crocodile, ‘Ton’, will be moved from Australia Zoo to Wildlife Habitat later this year to join the growing family of salties now in residence at the Port Douglas wildlife park.

Final measurements of the crocs revealed that they are larger than previously expected, with ‘Digger’ measuring a whopping 4.5 metres.

At Wildlife Habitat’s CrocArena, the ‘Swim With The Salties’ adrenalin-fueled experience will allow guests to swim eye-to-teeth with these apex predators, as the estuarine crocodiles lurk beneath the water and lunge for their meal.

Completion of CrocArena will mark the third phase of Wildlife Habitat’s major renovations, following the opening of the Nocturnal Habitat and reimagined Rainforest Habitat, which features treetop walkways and birds-eye viewpoints in a stunning recreated rainforest environment.

Wildlife Habitat General Manager Clare Anderson said that she can’t wait to share each of the new and exciting experiences with future Port Douglas visitors.

“We’ve been working very hard on rebuilding the park these last few years, and are now ready to amaze visitors from all around the world once borders reopen,” Ms Anderson said.

“These reptiles will no doubt make for a thrilling once in a lifetime swim experience for those who dare to take the dive!”

CrocArena is in the final phase of construction and is preparing to open late August.

Wildlife Habitat Port Douglas is Australia’s leading wildlife experience, providing visitors with a chance to observe a vast range of flora and fauna up close.