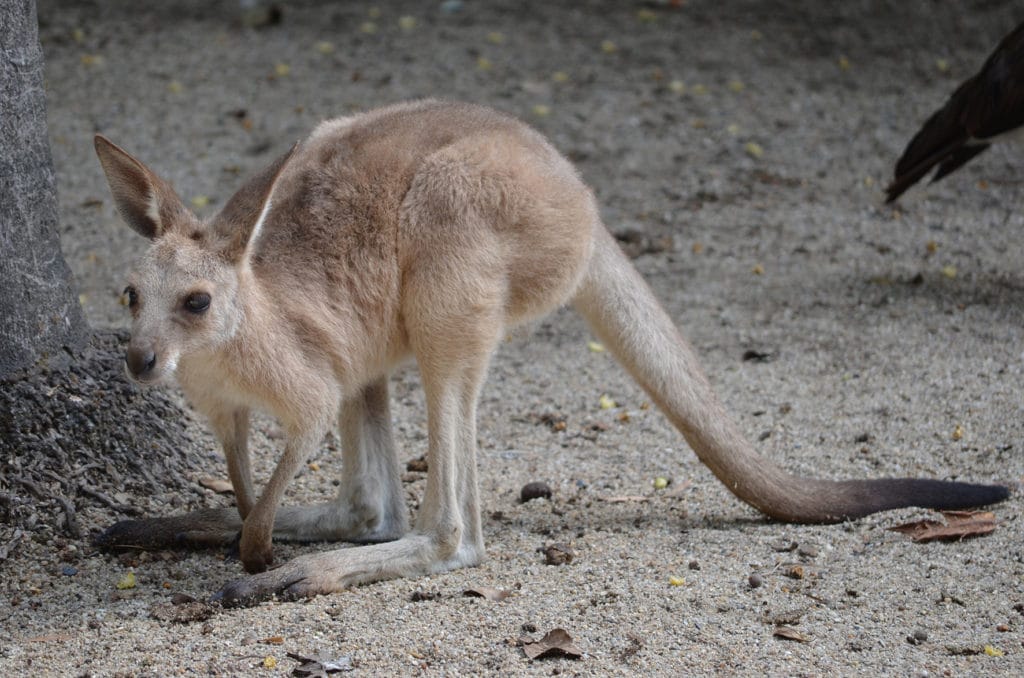 Wildlife Habitat has one of Queensland largest range of macropods. The word macropod comes from two Greek words meaning ‘big-footed’. Most species of macropods are known as kangaroos and wallabies, but wallaroos, quokkas and pademelons also belong to this family.

Until recently it was believed there was only one species of Grey kangaroo, but two are now recognised; the Western grey and Eastern grey. The Eastern variety is found in all east Australian states and is the only kangaroo species found in Tasmania. Second only in size to the red kangaroo, males can weigh up to 70kg and stand 1.6m on their haunches. Females are a lot smaller at 35kg and 1.2m.

Our Eastern Grey kangaroos are the friendliest kangaroos you will ever meet. Posing for photos with cheeky expressions and tongues out. They will become your new best friend but be warned they will steal your hearts!

Parma wallabies are Australia’s smallest wallaby. Weighing only 5kg and are about 50cm tall. They are solitary creatures that spend the day in wet forest and forage for grasses and herbs at dusk and by night.

Our cute little Parma wallabies can be found in the shady areas near the Freshwater Crocodile enclosure or under the trees near the Grasslands bridge. With a bit of patience and quiet they will come and feed from your hand.

The Agile wallaby is the most common wallaby in the wet tropics. It is also known as the Kimberley, the sandy, the jungle, the grass and the river wallaby! Males weigh up to 27kg, stand at 1.2m. Females only 15kg and 85cm high. The best place to see them in the wild is between the Kewarra and Trinity Beach roundabouts on the Captain Cook Highway in Cairns. A number of large mobs feed off the grasses in the paddocks there.

Photos of our male Agile wallabies often come with the meme ‘Do you even lift bro?’ as they develop heavily muscled arms and broad shoulders. Agile wallabies are quite shy and recluse, however we have a number of hand-raised Agile wallabies who will happily come and introduce themselves to you… for some Roo Food of course!

Wildlife Habitat has a reciprocal relationship with FNQ Wildlife Rescue, supporting each other in our macropods rescue effort with the sharing of knowledge, medical supplies and other items such as pouches. If you find an injured animal in Tropical North Queensland call them on 4053 4467, their rescue hotline is manned 24 hours a day.

Swamp wallabies are found along the eastern coast of Australia and several offshore islands. Swamp wallabies are the sole surviving species of the genus Wallabia and genetically are different to other wallabies and kangaroos. The weigh 13-17kg and sit about 75cm on their haunches. Swamp wallabies usually feed on their own but individuals may come together when resting. They are most often found in tall, wet eucalypt forest.

Our Swamp wallabies, like the Parma, enjoy spending the day in the shade of the trees near our Freshwater Crocodile enclosure. They are quite friendly, although females are wary when they have a small joey in their pouch. Sometimes you will find them on the Croc Boardwalk, foraging for native figs that have fallen from the trees.

Wildlife Habitat breed the Northern Nailtail wallaby and you can enter their breeding enclosure to feed and interact with them. They are quite cute, with little paws that cling to your hand as you are feeding them.

Pademelons are medium-sized wallabies found in rainforests and dense eucalypt forests. There are 3 species of pademelon. The Red-necked, Red-bellied and Red-legged. The Red-legged is found along the east coast of Australia including Northern NSW, Queensland and New Guinea. Males continue to grow throughout their life, reaching approx. 7kg. Whilst females only reach approx. 4kg, their height is similar – males 50cm and females 45cm. Pademelons have a short tail for a wallaby.

Here at Wildlife Habitat we have a number of red-legged pademelons that can be found in the Rainforest habitat within our cassowary enclosures. It is a tough call but I think they are the cutest of the wallaby species here at the park.

Millions of years ago, kangaroos were found in trees, they evolved to become ground dwelling. Then, in Australia, 2 species evolved again and headed back into the trees! They are the Lumholtz’s and Bennett’s tree-kangaroos. Both of which are endemic to Tropical North Queensland, that means they are found nowhere else in the country.

Tree-kangaroos are solitary animals but as their young stay with their mothers for almost 3 years, females are commonly seen with offspring. Tree-kangaroos are not strictly nocturnal; they are mostly CATHEMERAL – active for short periods throughout the day and night. After significant activity they will have a nap.

Still not much is known about these elusive animals. We work closely with universities and Tree Roo Rescue and Conservation Centre in an attempt to learn more about their behaviours, breeding habits, diet and conservation issues.

Our Savannah habitat is home to the majority of our macropods. We definitely recommend you grab a $2 bag of Roo Food (all proceeds go towards our Wildlife Care Centre) from Reception or the café prior to heading down there. Our macropods are most active early in the morning or later in the afternoon, join our 4pm Savannah and Pelican feeding tour for an amazing insight into these gorgeous unique Australian animals.